Frederik Voss
Denmark
Published in in English on Jul 14, 2015

A month and a half ago when I left the Mew show in Amsterdam, I had a pretty clear idea about how the concert at Roskilde Festival would be. A longer setlist that would include Rows, visuals back in for the evening, a huge crowd and a band that was greatly motivated to make the concert memorable. I am about to be very right about all those things, yet it isn’t nearly going to be the concert I had imagined in the Netherlands. Mew is a trio again, and it’d be wrong to say it isn’t a weird feeling. Before the concert, Danish media are buzzing, trying to get an answer about his departure, but none is given. The rumour spreads like wildfire across the camping area. Bo Madsen has left Mew.

With a lack of solidarity, I jump into the queue a couple of hours before concert start. The first fellow frengers have been queueing for more than 12 hours to get into the front pit of the stage. I’m not planning to be in front rows though, so I make up excuses for my bad behaviour. I have missed several concerts due to excessive alcohol intake during the festival. I – of course – don’t want to miss Mew, and so for the first time in days I’ve had less than five alcoholic beverages for half a day. My body is responding weirdly to the lack of alcohol and my voice is almost gone on the second last day of the festival. They are set to play at 1:30 on Friday night at Roskilde’s main stage, Orange. A perfect slot in the schedule for a Mew concert, many would argue. I agree.

They open much like they’ve been doing since the release of +-, with Witness and Satellites. The crowd is ecstatic. As they reach The Zookeeper’s Boy, the long shelved visuals are back on. I must admit it is a great pleasure to see them again after so many years. I have missed them. The screen is fairly small on this huge colossal of a stage and it doesn’t take away all the focus from the band, as it has sometimes back in the days. In front of the screen the light installation they’ve had during the European tour is still up, and it makes up for a nice interplay between the two every once in a while.

After the pop-couplet The Night Believer/Beach, Johan Wohlert takes the microphone and tells the audience that he is very happy that he’s not wearing his glasses this evening, as this must be the largest crowd Mew has ever played for. From the front pit it is impossible to get a real sense, but with a capacity for 80.000 people it is only the last concert at the same stage (without Johan) that has a chance of competing with it.

The middle section with She Came Home For Christmas, Snow Brigade and She Spider prove that Frengers is still the album that most Danish people hold dear. In the intro of Snow Brigade new live guitarist Mads Wegner proves that he’s a worthy live stand-in. In general he does a fair job trying to make me forget that Bo is not there. It’s not an easy job to have – difficult, difficult, different.

Sometimes Life Isn’t Easy is probably the song that I least expected to hear this night, but it brings shivers down all of my spine when Jonas gives his great power falsettoes “No, don’t cry for me / Celebrate el sueño”. Another surprise is Making Friends a couple of songs later. It suffers a bit sound wise, but it has absolutely beautiful visuals that seemed like someone else than Jonas Bjerre made them – or else he has shifted his animation style quite a bit.

Then a dream is fulfilled. Rows live! Lots of fans had eagerly wanted to see this song played live since they first streamed +- on various websites earlier this year. I feel very fortunate to get to experience the début of this song. Some wondered whether they could really pull off the ending of the song live. I feel very fortunate to get to experience that THEY CAN. It is an epic, and proved to be so live as well. People seem numb in the pit. There’s a great focus on the band, but very few sing along to this one. No one dares to jump. This is a moment of awe. A band that acquired a tool box of epic tricks during the last 20 years, that all comes to display live at once. We even get Jonas-styled animations in the final part of the song. Then they leave me speechless and exit the stage.

For a while some people are getting very nervous around me. Are they not playing Comforting Sounds? They do. I’m not sure that they would get out of the festival grounds alive without playing it. Personally Comforting Sounds has done less for me in the last couple of years than it used to, but this night, just around 3am, it does feel necessary. 10 years and 2 days earlier at the very same festival I experienced Mew for the first time live. As I stand alone in the pit, I wonder where the hell did that decade go…? While I was moved to tears by the song back then, I never understood that the purity the 12-year-old me possessed is exactly what the song is about losing. I’m glad I’m standing alone in the audience this evening. I probably know some 100+ people there I could have watched this concert with, but I don’t feel like it. “Nothing is pure anymore but solitude” as Bo Madsen quietly ends his Africa Express jam the next day. 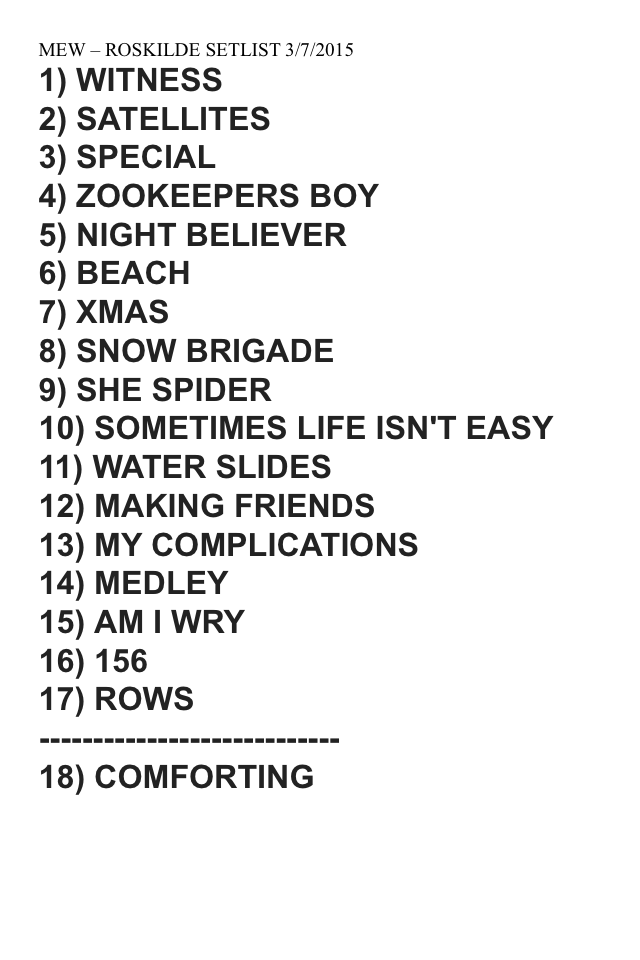