Tero Heikkinen
Finland
Published in in English on Nov 29, 2009

These two shows could not have been any different from each other. The show in Stockholm was relaxed and was held in an absolutely beautiful venue. Cirkus is a round-shaped theater- and concert hall which suited perfectly for Mew. It can be found from the island of Djurgården, right next to a famous zoo where animals of many kinds attract the tourists. The audience was a little off sometimes, but the sound was perfect from start to finish. Some 1500 people attended, but there were still quite a few empty seats left. Even though, the band is not as big in Sweden as it is in Finland, the Swedes got two shows while the Finns settled for just one. Plan Three supported both Swedish shows and Oh No Ono opened for Mew in Finland. I’m not gonna talk so much about the flawless show in Stockholm, let’s have a little rant…

Whereas everything in Sweden was relaxed, everything in Finland seemed forced. For a 40€ ticket price (most expensive for Mew ever – anywhere!!!) the Finnish audience didn’t get to see the band they paid for, and the venue is to blame. Helsinki’s Old Ice Hall is as cold as the name refers to. 4500 people (world’s biggest audience for a Mew solo show) attended the concert that can easily be named as the worst Mew show in Finland (where they have played quite a few times before). Last summer’s show at Ruisrock Festival with 20 000 people shines in comparison to this. The performance works better with a massive audience if the moderately dark sky is above you – and not the ugly ceiling. The sound was terrible most of the time. Sometimes the bass echoed from the walls covering everything else, including the singing of Jonas Bjerre. In Bamse, the bear’s speaking voice was so low that the words were incomprehensible. Only song that really seemed to work was the medley of New Terrain, Nervous and She Came Home For Christmas. As was expected, the last track from the medley got a really loud cheer from the crowd, and it came with a beautiful new bubbling snowflake animation. The backdrops were a bit different on this show anyway. The Zookeeper’s Boy didn’t have any (just extra lights) and Mari Helgerlikova was singing in the middle of the screen during the finale of Sometimes Life Isn’t Easy. Silas Graae had a nice spotlight on him during Silas the Magic Car and it looked wonderful. Bo Madsen talked about his first friend in America being a crazy Finn named Vesa, and that he was there watching the show. Also, the stage seemed small. It was like watching the old 1930’s movie format (1.33:1 aspect ratio) on a considerably wider cinemascope screen (2.35:1). But don’t take my word for it… if you know Finnish, read this extremely negative review here, and more positive ones from here and here. An English language interview with Silas, a review of the show and some pictures here.

Well, I guess Mew were great and did their best, but in the venue of this size you can’t really connect with the band unless you’re standing in the first 20-30 rows. No band has ever worked here well, as recent shows from The Prodigy and Placebo have shown. The Old Ice Hall also had two big stalls for selling merchandise and the queues were still huge. They must have made a dollar and a cent (in European currency), even though they were reasonably priced this time (t-shirts for 25€ and hoodies for 50€). Apparently the Danes are returning to this region in just a few months – please, never play this crappy venue again. Tavastia being Helsinki’s best rock club only fits 700 people, but as Jonas has often mentioned, it’s one of them venues that may offer the greatest possible intimate show for the audience. Interaction with the band would be perfect there.

The only thing that was better in Helsinki than in Stockholm was the setlist. It was overall great (and longer), other than that they always end the Finnish shows with Comforting Sounds and it tends to get predictable. During this song Jonas had a chance to save his voice by letting the audience sing a part of it, and boy, do they know the lyrics. Both of the setlists after the picture. Yes, one more rant about the photo taking. Live Nation totally screwed this up. They informed the photographers on the SAME DAY if they got a pass or not. Due to this, instead of 50 photographers from various medias around the country, 5 local ones were present. Live Nation don’t seem to care about promotion for the bands, it’s up to Sony Music here. For this reason, we are also without pictures, but this one was posted at Mewsite and you can find a few more from the link. 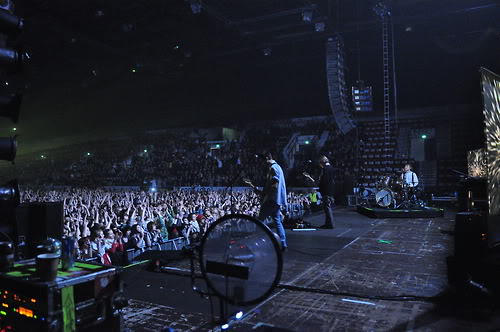