Tero Heikkinen
Finland
Published in in English on Nov 18, 2010

Do You Realize? Ahem… Do You Love It? Mew posted the following photo with Jonas Bjerre and Wayne Coyne. 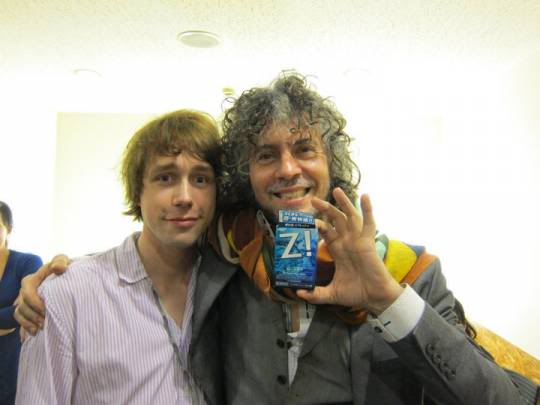 Mew have now played the three shows with The Flaming Lips in Japan and here are the setlists. If there are any errors, please let us know. Next stop Copenhagen. We will review both shows from November 28th!!!

Tokyo – November 17th
Do You Love It? / Hawaii / She Spider / Snow Brigade / Am I Wry? No / 156 / Eight Flew Over, One Was Destroyed / Silas the Magic Car / Special / The Zookeeper’s Boy / Apocalypso / Saviours of Jazz Ballet / Bear —– Cartoons and Macramé Wounds

Tokyo – November 18th
Introducing Palace Players / Am I Wry? No / 156 / She Spider / Hawaii / Eight Flew Over, One Was Destroyed / Special / The Zookeeper’s Boy / Repeaterbeater / Sometimes Life Isn’t Easy —– Do You Love It? / Comforting Sounds

It is also worth mentioning that Eggs Are Funny has a release date in Japan. The album (CD+DVD) will be out on December 22nd and it includes two bonus tracks which are Apocalypso and King Christian (as tracks 16 and 17).