They say the rain in Spain falls mainly on the plains… not true I say. Well, actually today is quite nice (although not as sunny as we had hoped in our naive minds) but yesterday was a little bleak, rain drizzling down on Vittoria constantly. Must admit it feels a bit weird to have finally beaten the jetlag from Japan only to re-experience it in all its glory going back to Europe… but we are in good form. Last nights gig was great and I do hope we won over some Spanish frengers along the way. Tonight we’re playing Madrid. I am hoping to get to see the Prado museum which should hold some Velasquez and other glorious stuff. We have invited the girl from our album cover to the gig but not sure if she’s gonna make it. She’s busy being a famous bull fighter here in Madrid.

We had arrived in Madrid overnight and I knew that one thing I had to do was to visit the Santiago de Bernabeo stadium, home of the migthy Real Madrid….

Unfortunately there was no game on that day but I still thought that seeing the stadium would make for a great fieldtrip!

And Yes! I was not let down in any way….. The place was colosale!! And the tour gave me the chance to sit on “the bench”, touch the pitch and visit the locker room… This means that I´ve now exchanged buttsweat with Zidane, not bad for a days work! The whole thing ended with me falling to my knees infront of the small picture of Michael Laudrup, the only true danish hero…… ever!! 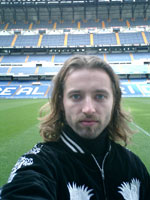