For me, Mew shows coincide with significant turning points in my life. Their 2009 show in Brooklyn aligned with a tumultuous family falling out. In 2015, I saw them in D.C. shortly after beginning a Master’s program. This July, I moved 7 hours from home to Detroit, a new area where I knew absolutely nobody.

My first mission was to meet new Frengers. Doors opened at 8, so I was hoping to arrive at least an hour early to have some conversation in line. Unfortunately, I had to stay late at work until 7:30. I left for the concert at 7:45, and still arrived as the line was being let in. Usually driving 4 or more hours to see Mew, I found a 20-minute commute to the venue almost too good to be true. Fortunately, I was still able to land a front row spot after buying a new shirt.

What I was looking most forward to was In A Better Place. This song has struck me most personally from Visuals; I played this on repeat when moving to another state. The moment Silas Graae began drumming, I was teary eyed. In A Better Place was exactly what I needed to hear. During Special, there was a slight hiccup in the performance. I’m not entirely sure of what happened, but it sounded as though there was an issue with Dr. Watt’s keyboards, which may have thrown off Silas. Because I was front row, I was able to see the setlist placed on the floor. I am unsure if this was because of the aforementioned hiccup in Special, but The Zookeeper’s Boy was skipped (much to the dismay of fellow concert goers).

Jonas Bjerre had a different energy during this show. Many times, I found him grinning, making small talk between songs, and even (trying to) dance on stage. The rest of the band, however, seemed somewhat reserved. Usually, I feed off of the electric energy of Johan Wohlert, but this night I found Jonas to be the most mesmerizing. After Apocalypso/Saviours, Mew added Carry Me to Safety. Carry Me to Safety hadn’t affected me in the way it seemingly had others, but hearing it live placed a new heavy, bittersweet tone to it. In a way, I could hear the strain of a lost friendship in the way Jonas sang. It gave me a tightness in my chest and choked me up more than Comforting Sounds. At the end of the show, I managed to snag a setlist (thank you kind Frenger for giving it to me!).

After the concert, a dedicated league of four Frengers waited outside for about an hour. Because there were so few us, we were able to have some decent conversation. As always, I was slightly starstruck, but this may have been the most I’ve talked to them. This concert brought a familiarity I didn’t know I needed. Part way through the show, I realized that the only people I knew in any capacity were those on stage. I felt I had to cling to every note, every word sung because it was the first comfort I had felt in over a month. Thank you Mew, for always feeling like home. 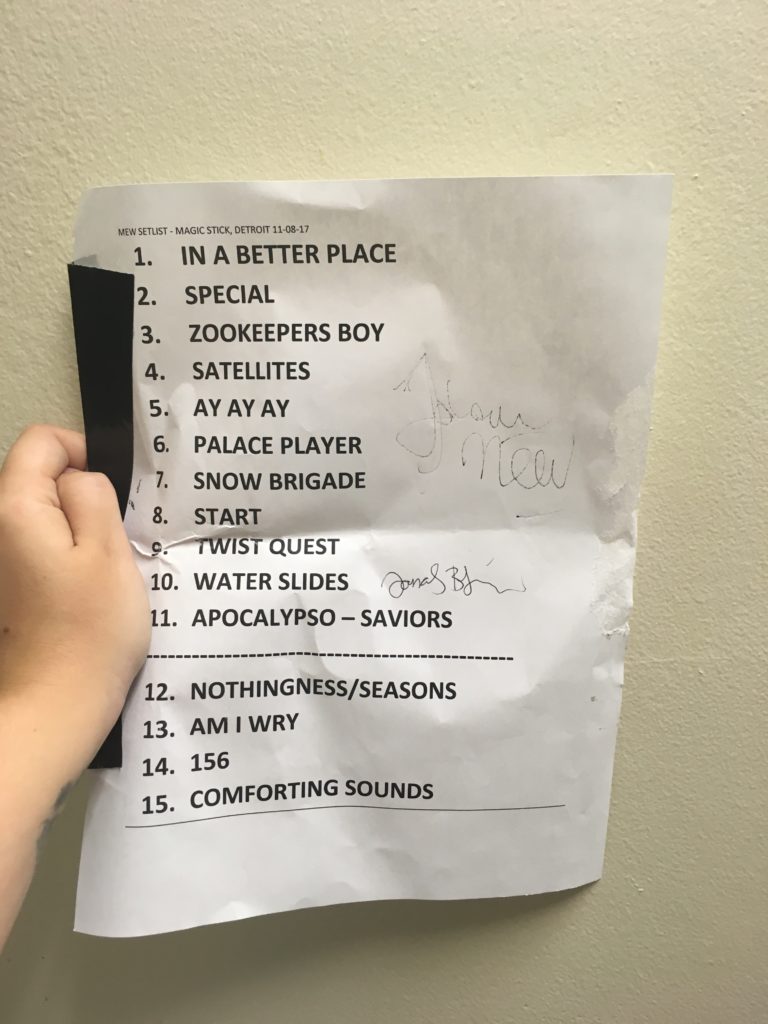