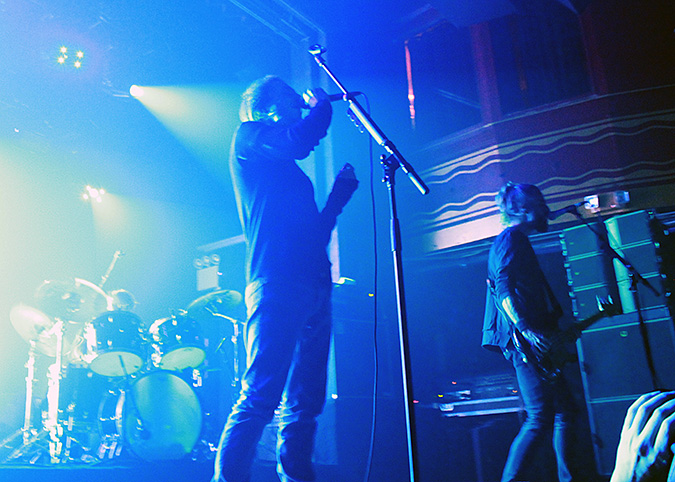 The old saying goes, good things come to those who wait, and fans (or Frengers as we are called) of the Danish rock band, Mew, have been waiting since 2009 to hear something new.

As if having spent the last six years in a time capsule which had been buried in a special hiding place unknown to me and other lovers of Mew, only to be unearthed at the whisper of a secret password, last night Mew entered my life again. My last Mew sighting was back in 2009 and at the very same venue, Webster Hall, they resurfaced. Just as they had done back then, the band played a nearly flawless set, and just like the last time, I listened intently to every musical change, every vocal line, wanting to savor each and every note that filled the air of the old rock venue. Why the need to savor each moment? Because Mew does make you wait, and the memories will be all you have until they visit again. They come out of the their elusive rabbit hole, pulling you back in in with glorious imagery and whimsical sounds, only to disappear again until Jupiter aligns with Mars…or something. The point is you know you’ll miss them when they’re gone.

See, back in 2009, I knew it would be a long time before I saw them again. Knowing this, I told myself that I would see Mew at every show they played in my part of the world. They weren’t coming to Philadelphia (my city) this time, but to Washington, D.C. and New York City. My very first Mew concert was one I attended by chance in 2007 — I believe in Washington D.C. at the Black Cat Club. My best friend, who loved this band from Denmark insisted that I see them. She knew I loved music and progressive rock, and thought I needed to see this band, so I did. And so began my deep admiration for Mew.

I grew to love their sound so much, that in 2009, I saw them at every show in the tri-state area. I had found this band later in life than most Frengers, and I wasn’t about to miss any opportunity to experience them as often as I could. Flashing forward, I got totally ahead of myself and purchased tickets for the Washington D.C. show, believing that I would have the time and energy to attend both there and NYC. Of course, real life intervened, and I ended up with the one show in New York. I knew that I would have to make the most of it.

I decided to watch the show from a completely different vantage point: the balcony. Anyone who knows me and my love of live music, knows that I am a pit girl and I like standing at the barrier, but for some reason, the upstairs of Webster Hall beckoned me. Therefore, I made the trek upstairs. It was a good move. Not only did I see everything clearly but I also wasn’t smooshed like a sardine. Lots of room to dance, sing, and jump around (which my best friend and I did plenty of.) I loved how the look of the audience at first glance was absolutely unpredictable by way of knowing what force had pulled us all together. Music is an equal-opportunity gift giver, and knows no limitations and excludes no one. That’s the beauty of music; no matter the type or genre, it belongs to everyone. In my eyes, Mew’s sound exudes this belief; their audience is a reflection of their sound. Looking down on the crowd made it seem like the United Nations of Mew—people—Frengers, of all ages, ethnicities, and walks of life—all brought together by the necessity to be in the same room as these Danish rockers—to hear sounds that only Mew could make.

The opening act, The Dodos were fine enough musicians, and well-meaning. They had their faction of fans who had come to see them, even though it was clearly a Mew-crowd. Something that became quite clear, every time the lead singer of The Dodos mentioned Mew by name, everyone would cheer.

After the opening act’s set ended, it only took about 15 to 20 minutes for Mew to take the stage, although I’ll admit it felt like forever. The anticipation was truly that strong. And then, what I and many other Mew fans had waited for began to unfold before us; the band slowly took their stations on stage, one by one, until Jonas Bjerre finally joined them and the already frenzied crowd went crazy with applause. They immediately started with the rocking track Witness from their latest “+ -” to get everyone immediately worked up and then flowed easily into the atmospheric Satellites which was accompanied by a backdrop of celestial-looking animations. That’s when I got really excited because I knew we would be one of the lucky concert crowds to get the famous Mew-esque animations that often accompanies their performances. The bassist Johan Wohlert, welcomed everyone and after a few brief words the chords to my favorite song from And the Glass Handed Kites began to fill the air: Special. As a lover of progressive rock and classical music, I was immediately attracted to Kites as a concept record, because every song blossoms into full-on orchestral-sounding movements. Just like the recording, the band effortlessly then rolled the ending of Special into the beginning throes of The Zookeeper’s Boy (animations included). How seamlessly Special rolls into The Zookeeper’s Boy is a clear example of this type of seemingly endless loop tapestry of sound that Mew is able to expertly execute on stage even better than they did on the studio recording.

With ease, they moved from songs on their beautifully crafted And the Glass Handed Kites, to songs on what I have come to believe is my favorite Mew recording thus far, No More Stories…. Introducing Palace Players is one of my favorite songs because of the lyrics, but I love the guitar chord changes as well. Hearing them sing that song again live reminded me of when that record was first released and how I played it over and over again at work until my staff actually asked me to burn copies of it for them. They followed it up with a lovely version of Sometimes Life Isn’t Easy with the fun dancing animations, but minus the bit at the end with the elderly woman singing. I actually liked this live version more. The focus on Jonas amazing voice always works for me. In fact, one of my favorite parts of the night was the medley he sang, with Dr. Nick Watts accompanying with “jazz piano” as Jonas referred to it. His vocals on the part from Louise Louisa were absolutely breathtaking. It sounds so unoriginal to say it this way, but really, you couldn’t hear a pin drop as his voice bounced off the walls of the concert hall.

There were plenty of surprises included in the night as well, especially when Jonas told the crowd that “we have a special surprise for you”…and then he introduced Kimbra to the stage who appeared to be just a much a fan of Mew as the rest of us as she accompanied them on Water Slides. Kimbra would join them on stage again later in the evening, for the encore of The Night Believer. The surprises for me were to hear She Spider after so long, and to hear Rows live, helping me really understand why this song ended up being one that resonated with most of us Frengers since the release of “+ -“. 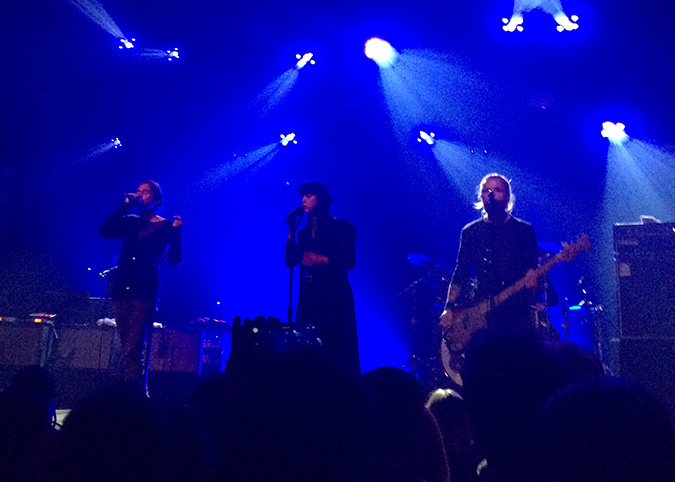 The set list was a cafeteria menu of favorites, new and old, ensuring that no one left Webster Hall feeling gypped. The closing song of course was Comforting Sounds, and I believe it was the first time all evening when I became a bit misty. I knew it was truly the end of an event that I had waited over 6 years to experience, an experience that included changes than I had anticipated during my 6-year wait for Mew to reveal their new skin to us. Johan returned, and Bo Madsen exited, and somehow, the world still turns, and the music remains as dreamy and rich (if not more so) as it was before.

Then it all did finally came to an end, with the band all coming together, including Dr. Watts and the newest palace player, Bo’s replacement on guitar, Mads Wegner, taking a bow, arms linked around one another’s shoulders. I felt a twinge of sadness for the past, but mostly I was able to look ahead to Mew’s future. I had to face facts, maybe Bo will come back, but maybe he won’t. It pains me to even type such a thought, but there it is. However, Mew’s performance, which relied heavily on Mads’ strong guitar abilities, left me with the peace of mind (and hopefully did the same for everyone else), that if Bo didn’t return, Mew had proven they could soldier on without him.

Before leaving the stage, Johan Wohlert went to microphone to thank everyone again and said, “See you again soon.”

I thought about his words as we all spilled out into the busy streets of New York after the show. His words gave me a little hope. It made me think of that line from Special, “This time you will go”, the only difference being, that while I know they are leaving again, hopefully unlike before, Mew won’t take too-too long to return.

Either way, I think we are all happy to wait since we know that good things come to those who do.